Have a bit of a fascination with Philip Ridley plays as he has a tendency to throw in something shocking, disturbing or deeply moving.

Vincent River is the fourth play of his I've seen and is celebrating it's 10th anniversary being performed in an intimate space above the Landor Pub in Clapham.

It is a two-hander, set in a dingy East End flat belonging to Anita who's son was recently brutally murdered. Anita is not only haunted by the circumstances surrounding her son's death but by a teenage boy, Davey, who seems to be following her around.

What ensues is an initially awkward conversation between Davey and Anita but oiled by bottle of gin, painkillers and a spliff, becomes a confessional for repressed feelings and a final facing up to the truth.

Davey is the one who found the body but it is obvious from the start that there is more to his involvement than merely being the discoverer. Likewise Anita has her own secrets and in revealing them is able to finally accept her son's homosexuality and learn how it was he died.

Two former Eastenders' actors take on the roles: Nicola Duffett and Elliott Jordan. The acting was a little stiff to start with but they both got into their stride as the play progressed culminating in tender and emotional performances that had me not only crying but also getting a bit snotty. 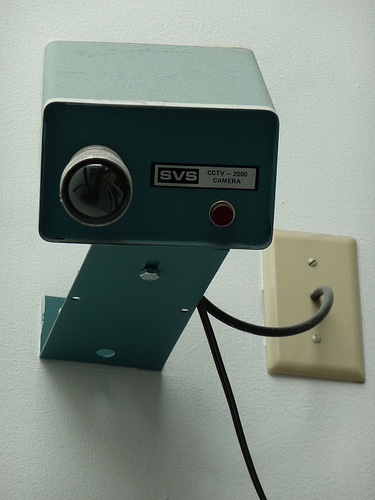 Anyone who's happened upon this blog before will know that a dream came true for me recently when I got to see a recording of Trevor Nunn's Hamlet at the Old Vic from 2004, starring Ben Whishaw at the V&A archive.

I didn't even know of the archives existence until a few weeks ago and it was certainly a different play watching experience to anything I've had before. I've watched professionally shot DVD's and film versions of plays but just to go to the archive and watch something that has been filmed for reference only is something else.

You have to book in advance so your chosen material can be retrieved for you and there are all sorts of instructions like taking two forms of ID, no photographic equipment, food or drink etc and you effectively get black-balled if you are more than 90 minutes late.

The building itself is tucked behind high security fencing around the back of Olympia and looks like it was once a rambling Victorian mental hospital.

Access is through full-height turn-styles which are electronically operated once your name has been verified on the intercom. I kid you not. They must have some valuable stuff in there somewhere. 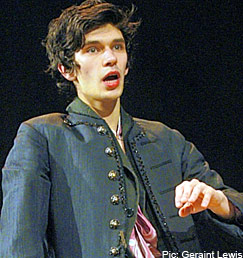 As fantastic as David Tennant and Jude Law were and as good as all the other Hamlet's I've seen on stage and screen, something has always not been quite right: It's the actor's age.

There is much debate about how old Hamlet is which is pretty much divided between those that go for 30 and those that go for a teenager. It seems to be dependent on which folio of the play you read as well as interpretation.

In all the versions I've seen where his age has been pinned by the gravedigger in the Yorick scene as thirty, Hamlet having been alive as long as he's been in the grave-making profession, something just rankled a little. He's referred to as 'young Hamlet' and as a 'youth' frequently and there is something in his behaviour that I've always felt made him young, not immature necessarily but not having the maturity of 30 years of life experience either.

And these feelings are vindicated now I've finally seen (at the V&A theatre archives) Trevor Nunn's Hamlet which was performed at the Old Vic in 2004 and had a 23-year-old Ben Whishaw in the title role.

It was a hallelujah moment for me. It was like the piece of the play clicked into place. Whishaw is a young Hamlet: vulnerable, sullen, moody, disobedient, cheeky and delicate. It all works so well. I could forgive him his inaction and prevarication a lot more readily as an inexperienced youth.

Michael Sheen to join the list of famous Hamlets 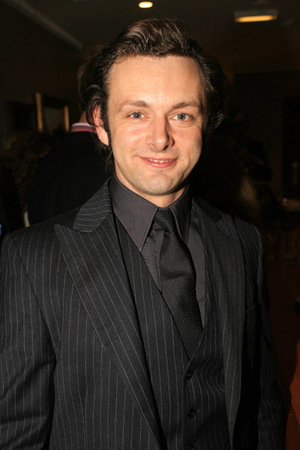 I've been catching up with theatre news over at WhatsOnStage.com and came across this story which I'm surprised I missed. It seems Michael Sheen is to take on the Bard's most famous role at the Young Vic.

Now I am a bit of a Hamlet fan and never tire of seeing it performed, having been captivated by the play as a student watching it performed at the Theatre Clwyd in Mold. My favourite performance of recent years has to be David Tennant followed by a surprisingly good Jude Law.

I also have high hopes for Ben Whishaw's interpretation when I see it at the V&A archives on Friday.

Coming up I'm hoping to see John Simm at The Crucible. I've seen Simm on stage a couple of times, first showing off his comic acting skills in the superb Elling and then in the drama Speaking in Tongues, so I know he's good on stage and am really quite excited about what he'll do with the Dane. I predict a quietly angry and brooding Hamlet.

And then I'm sure I'll not be able to resist Rory Kinnear at the National Theatre in the Autumn. I've seen him in a couple of things at the National and he's always been good but the jury is still out on whether he'll pull off Hamlet.

So what about Michael Sheen? First of all I must say I'm excited about it being at the Young Vic and not one of the big old West End theatres. Every time I go to the Young Vic they seem to have the stage in a completely different place which makes for a fresh experience every visit. And it is a small theatre so you can usually see the sweat on the actors' brow wherever you are sitting. 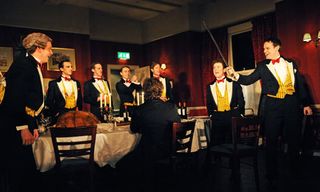 The Royal Court has been a breeding ground for successful West End transfers (Jerusalem and Enron to name just two) so I've been scouring the schedule for potential gems to catch before they go big and expensive and plumped for Posh by young playwright Laura Wade.

I'm not sure it is quite in the same league as Enron (which I saw in the West End) and Jerusalem (which I've heard a lot about) but it certainly shows that Wade is a talent to watch.

Posh is set around one evening where an elite Oxford dining club - called The Riot Club - are meeting for one of their infamous dining and drinking events. The Riot Club's forte is trashing the host venue for after-dinner entertainment and then leaving large sums of cash behind to cover the costs.

Thanks to a conversation with Adam last night I now know that the Riot Club is in fact based on the real life Bullingdon Club which lists current Prime Minister David Cameron and London Mayor Boris Johnson among its alumni. Nice. Promised I'd write about this in a bit more detail earlier in the week, so here goes....

It's great to see a piece of classic drama such as Thomas Middleton's Women Beware Women played out on the grand Olivier stage at the National with all the stagey whizz-bangery and live music and singing they do so well.

If you want a plot summary - it's complex tangle of plotting and trickery as you'd imagine from a Jacobean drama - probably best to go to the official website but boiled down its about greed and satisfying carnal desires.

In classic Jacobean style there is a good serving lust and envy with most of the characters displaying little in the way scruples over how they get what they want and as this is Middleton it naturally includes everything from lying and bribery to rape and murder.

As with The Revenger's Tragedy which the National put on two years ago the whole play is essentially a set up for a delicious revenge-fuelled killing-fest in the second half.

Pride of place - my signed playbill The story of how I came by this now treasured possession can be found on my other blog if you are interested.

I've never seen The Crucible before, neither have I been to the Open Air theatre as he sun is shining and there is a hot weekend in prospect it seemed like a good idea.

I can confidently predict a change in weather to something a bit more cool and damp around mid-week.

Still I have my thermals I bought for February in New York I can dig out. Play looks really good though, it's got Oliver Ford Davies in it, who was superb as Polonius in the RSC's Hamlet a couple of years ago, for a start:

While Harry Potter star Daniel Radcliffe has been proving his acting mettle and shocking grannies and mum's by smoking on stage and stripping off in Equus here in London and on Broadway, his cousin Dudley in the film series played, by Harry Melling, has been quietly hitting the stage himself.

I first saw Melling last year in Mother Courage and all her Children at the National Theatre. He played Swiss Cheese, a character that is the son of Mother Courage played by Fiona Shaw who, coincidentally, plays his mother in the Harry Potter films*. It wasn't a major role  but he'd certainly shed the bumbling Dudley character and size and I remember him from the play. 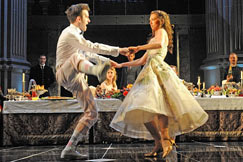 And so when I saw him listed among the cast for Women Beware Women, also at the National, I was eager to see whether the performance of Mother Courage was a one-off. But it certainly wasn't. While his character in WBW - The Ward - is again a small part he made his mark quickly in the first half and I was actually looking forward to more of his character in the second half.

He raised the biggest laugh of the night and got a spontaneous applause. He left me wanting more of the character and looking out for him in the climactic final scene. If WBW is a taste of what he can do I look forward to his next project.

There will be more Rev Stan thoughts on WBW coming soon.

* For those unfamiliar with the Potter films the stage-screen connection goes further, Radcliffe's Equus co-star Richard Griffith's plays Potter's Uncle and Dudley's dad in the film - incestuous, the theatre? 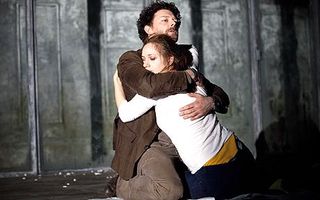 Mark Haddon’s novel The Curious Incident of the Dog in the Night Time is one of my all time favourites so I was always going to go and see his first play, Polar Bears which is debuting at the Donmar Warehouse.

Curious is a well-observed book told through the eyes of a boy with Asperger syndrome and although Polar Bears doesn’t have the same first person narrative it does have mental illness at its heart.

Kay, played by Jodhi May, has extreme bi-polar swinging from jolly hyperactivity to curling up in a ball and rejecting all around her.

And as Curious started with a corpse, so does Polar Bears: Kay’s. The first scene is a conversation between Kay's husband John (Andrew Coyle) and her brother Sandy (Paul Hilton) in which John confesses to having killed her, wrapped the body in the plastic left over from a new carpet and dragged the body into the basement. And so the journey of what led up to her violent demise begins.

The play explores the idea of mental illness and how people respond to it. Yes Kay is unpredictable but then those closes to her are one by one slowly exposed as not entirely rational either.