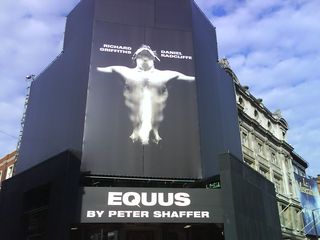 OK, so I'm addicted to theatre. I love the thrill of watching a live performance, of knowing that the particular performance I'm watching is unique.

I like to see the real tears in the actors' eyes, the sweat on their brow and the spittle fly when they are in full flow.

Back when I was a student in Liverpool I used to go to the theatre a lot as I could get really cheap tickets but, when I came to London to work in 1992, I couldn't afford it and got out of the habit.

About three or four years ago I realised that I could afford it again and looked around for something that took my fancy.

That play was Equus with Daniel Radcliffe. I studied psychology at University and I knew nothing about the nudity until after I'd booked my ticket, despite what people might think.

After the performance, I walked out of the theatre feeling alive and my love of theatre was reawakened. And I've been gradually going more and more ever since.